The opening of the “Abdulhamid Han II” madrasah in Tanzania 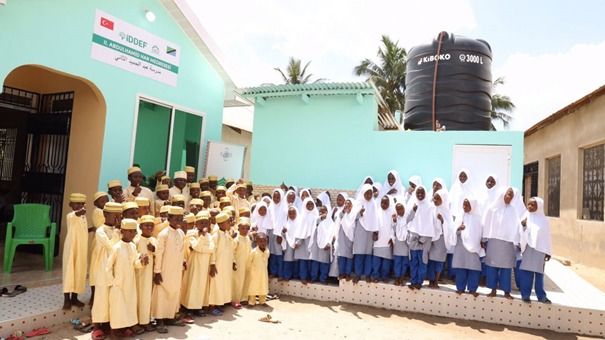 İDDEF has completed the construction of II. He opened the Abdülhamid Han Madrasa and the Ümmet-i Muhammed water well built in the garden of the madrasa. The madrasah, which is opened with prayers, will be a place of knowledge for Tanzanian children, and the water well will be breath. IDDEF, who is spreading education all around the world while is carrying out humanitarian help, is the mean to make children and youngsters reach free education opportunities. Under this aim, IDDEF opened the madrasah “Abdulhamid han II” with the support of its donors, in order to bring education to Tanzania, West Africa. The opening of the new madrasah and the “Ummet-I Muhammed” water well that is beside it, was realized with the presence of the townsfolk who showed excitement and happiness in their face. Thousands of muslims in Tanzania now will find benefit with the madrasah that was made with the support of our donors, which it turns to be Sadaqa Jariya for them. IDDEF took the responsibility to finish the construction of the incomplete madrasah in the area of Ilala, near to Darussalam city, Tanzania, and to immortalize the memory of the great sultan Abdulhamid Han in there. By completing the construction, the small students received their new madrasah with takbirs and prayers.

IDDEF in its statement said: “We started the project with the intention of completing the madrasah that our Tanzanian brothers had started but it stopped because the lack of resources to build it. We completed quickly the construction of the madrasah and its water well thanks to the support of our donors, we held the inauguration in the 103th mourning year of the sultan Abdulhamid II. We witnessed the happiness and excitement of the students and townsfolk during the opening. Since the first day we started walking in this path, we have been always on the side of our muslim brothers. Under this aim, as we carry out projects in the whole area and the other places, our projects and works will always continue in Tanzania, each day we keep in touch with more and more Tanzanian brothers. We are trying to bring the true Islam to every corner of this country. With the support of our donors, we are building masjids and mosques in order to facilitate their problems. We thank everyone who help us materially or spiritually.” Thus we began the construction of the madrasah. We worked beside our muslim brothers in that area with excitement. At the final stage, we visited our new madrasah with the children of the town. We started with the school registration. And finally, a happy ending… The opening of the “Abdulhamid han II” madrasah was carried out with its students and the townsfolk.