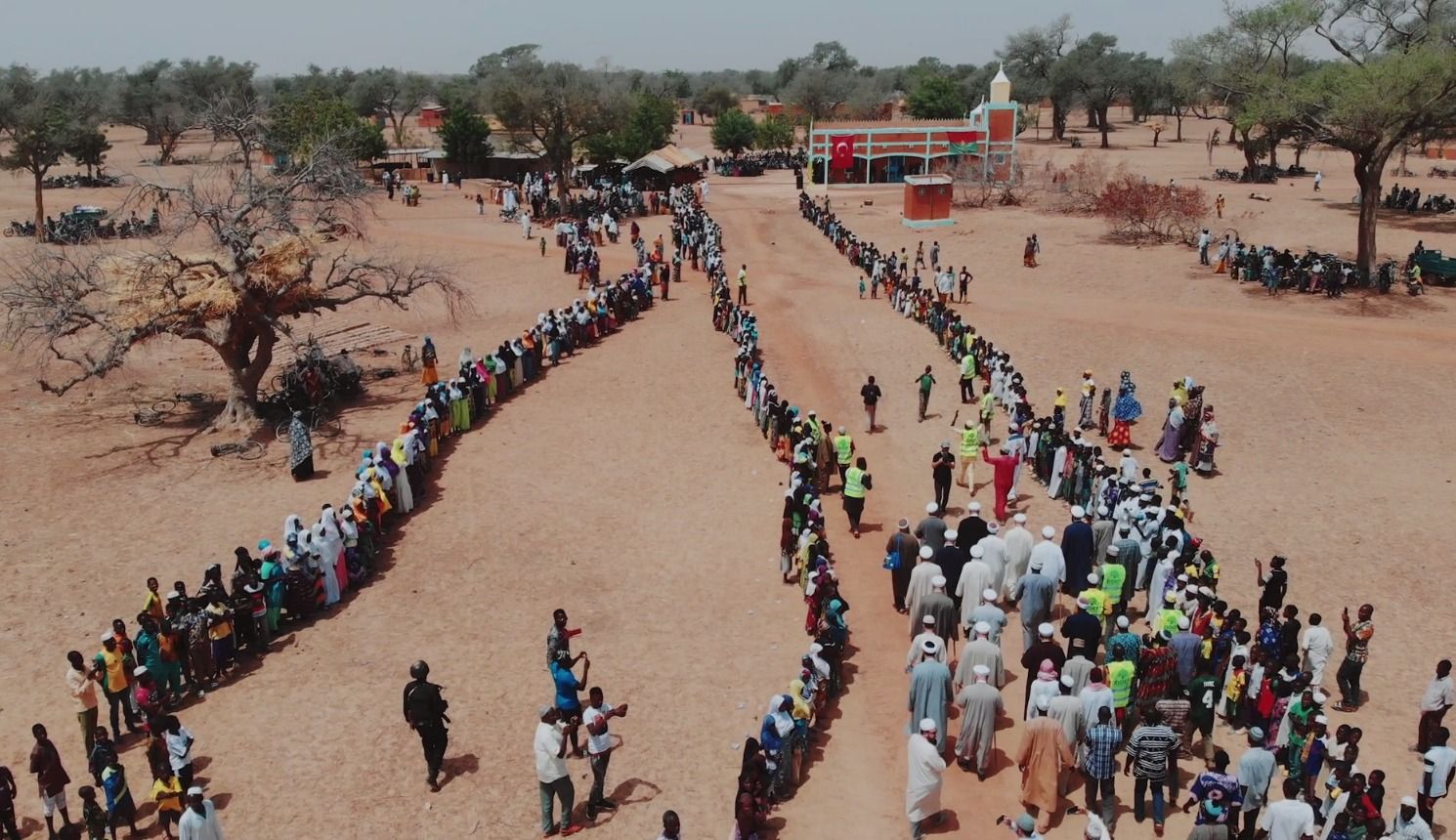 The inauguration of different projects as the water well, complex, masjeed and madrasah was carried out with the presence of the members of the delegation in Turkey. IDDEF carried out the opening of three madrasahs, a water well, masjeed, orphanage, and a complex in Burkina Faso, country in West Africa, where IDDEF keep working constantly since 2011 on the Islamic education and humanitarian aid projects. The 37 members of the delegation in Turkey participated and witnessed the opening and inauguration of the projects in Vadadugu, Markoussi, Yagma, Somassin, Bousse, Vousnango, Rahmetullah and Sabse. The first historic inauguration program was carried out in the capital of Burkina Faso, Vagadugu. Then, IDDEF hold a meeting in order to inform about the progress of the projects in the last 10 years around the 27 areas, especially about “Ornek Koy” development project and the inaugurations of complexes, madrasah, masjeeds, and water wells. The directives of IDDEF and their guests joined the opening ceremony of the projects in the town of Markoussi, Yagma and Somassin. The next opening ceremonies were carried out: In Markoussi’s “Osmanli hanimlar” complex, the opening of the “Huzurhane” madrasah; In Yagma, the “Mahmud effendi” orphanage; in Somassin “Ismet Onar” and “Ummet-I Muhammed” madrasah for girls. Burkina Faso’s Minister of interior affairs Kleyma Savadugu joined the inauguration ceremony where a couple of speeches were delivered, prayers were made, and the Qur’an was recited. The general director of IDDEF, Mehmet Turan in his speech, talked about the steps that are going to be followed in order to permanently establish the education project; He also remembered the first time when in 2011 started the project in Burkina Faso, and shared with the participants the excitement that arises from the “Ornek Koy” project that will cover 27 areas. Mehmet Turan continues: “In 2011, with the support of our donors we started the first education project with 50 students in a small institution of three rooms, in the area of Songandi. In 2015, we opened the “Mahmud Ustaosmanoglu” complex in Kamboinsin, Vagadugu. With our first students graduated from Islamic studies and memorization of Qur’an, we started a project aiming 8 towns in 2017. Nowadays, we are working with 54 scholars, 2159 students, 23 madrasahs, 19 water wells, and 12 masjeed. We are greening Africa not just with education, but also with our sapling projects, at this point we’ve planted 1000 saplings in Burkina Faso’s soil. Life came with the water well too. Now the knowledge meetings are growing not in the cities, but in the towns.” The opening of a masjeed, complex and a water well

The openings and visits continued in Bousse, a town two hours away from Vagadugu. The members of the delegations in Turkey visited the “Mahmud effendi’s Qur’an memorization center” which is formed by 22 students, and three scholars. Then, they joined the opening of the “Cebir okullari masjeed” in Vousnango; so, the “Necmettin Erbakan” and “Ismailaga” water wells in the town of Sabse. While the opening ceremonies were held with the intense kindness of Burkina Faso Environment and Urbanization Minister Simeon Sawadogo, local administrators and the people of the region, the citizens of Burkina Faso thanked the Turkish people and IDDEF for their education and development efforts that have been increasing for 10 years. On the other hand, within the scope of the African sapling project of IDDEF, 100 saplings entrusted by our donors were brought together in Sabse, the first drop came from the delegation, students and the people of the town. At the inauguration of the Ismailaga complex, Burkina Faso’s Environment and Urbanization Minister Simeon Sawadogo said: “A majestic work has been built in Sabse. It found life with the underground clean water and the saplings, also the electric is generated via solar energy. We thank Turkey saying “Long Live! Turkey-Burkina Faso friendship”. The students who are going to graduate from this complex will be the next president, doctor, lawyer, etc. They will be the workers of this country, Africa and the world. We ask for prayer to all of you, Turkey and especially to IDDEF. We ask Allah to give you the best. In your return to Turkey tell Recep Tayyip Erdogan that the friendship between Turkey and Burkina Faso is growing each day. I ask to our delegate in Sabse to build a Turkish house in here, so that when you visit us you will already have a house to live in.” At the opening of the project in Sabse, the general director of IDDEF, Mehmet Turan said: “The people in the town of Sabse have showed us how people can be happy with a few things. We told Burkina Faso’s Environment and Urbanization Minister Simeon Sawadogo last year that in the span of 10 years we will apply “Ornek Koy” project to 100 villages, that is our goal. He asked us to start it in this native city; we said 6 months, and now at the 7th month we’re making its inauguration all together. Right now, with our projects in 27 towns around 9 areas, maybe before 10 years pass, we’ll be reaching 100 towns with “Ornek Koy” project. We want to meet with Burkina Faso’s President Christian Kabore in order to introduce him the “Ornek Koy” project and with that, say bismillah and finish the project.” “We missed our brothers, that’s why we came here”

The scholar and one of IDDEF’s directive members Nedim Payalan, during the inauguration ceremony in the town of Vousnango said: “Muslims are brothers. Skin color it’s not important. The all mighty looks at t our heart. The prophet Muhammad (saw) said: “I miss my brothers”, then their companions asked: “Aren’t we your brothers?”. The prophet answered: “You are my companions; my brothers have not come yet”. Now, we missed our brothers, so, that’s why we came here. These madrasahs are the places where the ayats of Allah, religion, the tradition of the prophet, and Islamic law are taught. Thanks to Allah, the madrasahs are arising in Burkina Faso and all-around Africa. I pray to be these complexes, madrasahs, masjeeds, and water wells, the means to goodness in Burkina Faso.” IDDEF's education and development efforts to Burkina Faso ended with the examination of permanent works and the organization of a sohbet program by visiting the scholars and students who will be educated in educational institutions.